Etosha National Park is one of the top game-viewing destinations of Nambia. Spread over 22 270 km² of land in northern Namibia, it is recognized as one of the best safari destinations in Africa. Etosha with its dramatic landscape hosts a great diversity of wildlife and birds, despite its barren appearance.

Etosha is translated as the ‘Place of Mirages’, ‘Land of Dry Water’ or the ‘Great White Place’as the open terrain of Etosha pan endlessly pan with silvery-white sand, upon which dust-devils play and illusions blur the horizon.

Etosha’s vegetation varies from thorn-bush and woodland savannah to dwarf shrub savannah and grasslands to saline desert. Mopane trees are the dominating plant species with around 80% of the total trees present in the park.

The park is well-known for its unique Etosha pan, which is a large, shallow depression that is stretched over 5000 km of the park.

Etosha National Park is home to a vast array of wildlife with over 114 mammal species. You can spot lions, giraffes, zebras, blue wildebeests, cheetahs, leopards and hyenas moving freely in the park. Etosha is known for its large elephant population, who have distinctive short tusks. You can also see endangered and rare species such as the black-faced impala and the black rhino.

Apart from the varied wildlife, Etosha has a rich bird life with over 340 bird species including one-third of migratory species.

Etosha National Park is open for tourists all year round. However, the best time period for wildlife viewing is during the dry winter months from July to October. As you can easily spot the animal gather around the few sources of water that are available. While in wet season i.e, from November to April, is less fruitful for spotting wildlife as the animals move around more.

Etosha is well connected by road and by roadways and airways.

: Etosha National Park is located 435km north of Windhoek. You can either book a cab or take a self drive to the park. Generally, the organised tours and self-driving tour starts from Hosea Kutako International Airport which is situated 40km from the park

Even though there is no scheduled flight to Etosha National Park, but you can take charter flight to the park from the all the major airports of Naimbia. Etosha has three airstrips in the park.

Etosha offers an array of activities to do during your visit to park. Listed below are some of it: 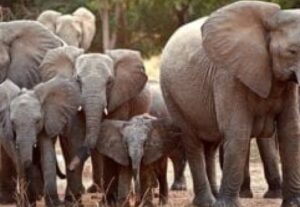 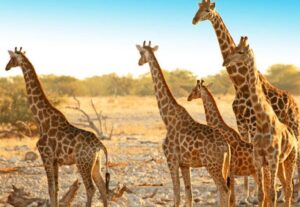 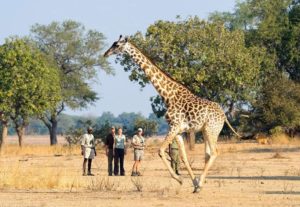