Tsavo East is located between Mombasa and Nairobi. It is the largest game reserve. The Galana River provides life-giving waters and passes through the park, housing the largest Elephant herds. It is the best choice of safari destination.  In some places, Samburu and Maasai tribes live. Nairobi presents a multi-faceted culture, while Swahili Coast houses picture-perfect beaches and historic towns.

This rock draws many elephants every day to quench their thirst as it has a natural dam.

They have interesting shaped rocks as it falls on the Galana River.

Visitors fly as there is plenty to see here. There are black rhinos and wild lions in Nairobi National Park. Nairobi has craft markets, restaurants, museums, and hotels.

Every year wildebeest, other antelope, and zebra migrate to the Maasai Mara National Reserve. This Great Migration is an iconic natural spectacle. Maasai Mara houses the Big Five and its predator sightings. Get the first row to catch with the action and enjoy staying in mobile camps.

Tsavo East and West are two national parks.  They are the protected wildlife areas, but the experience of safari is not the same. Tsavo East is prominent for its scenic red dust plains featuring the beautiful Galana River intersection. The river attracts wildlife diversity and this includes elephants in large herds.  This park has the longest lava flow. Tsavo West is greener, wetter, and more scenic that it is hard to spot animals. Visit Mzima Springs without fail. The Park gives a chance to see Big Five and 600 bird species.

Tsavo National Park allows doing a lot of things such as:

The Park houses Giraffe as a good population. It includes Impala, Zebra, and Gazelles, and Buffalo. It includes elusive Leopards, Lions, and Cheetah.

Lake Nakuru National Park is in central Kenya. Approximately the total area of the park attracts thousands of flamingos coming to mate, feed and raise their young. The park is a hotspot for birding with more than 450 avian species. It houses home to leopards, lions, and white rhinos.

Mount Kenya is the second tallest mountain in Africa. The two peaks need technical training and equipment. It reaches the summit. The best time for climbing is from January to February during dry months.

Lake Turkana is in its pale green color. It features an off-the-beaten- track with barren shores, stark beauty, and saline waters. There is a large concentration of crocodiles. Flamingos and Hippos offer the main attraction. Lake Turkana has the hominid fossils.

The entrance to the Park gate is located on the Mombasa Road from Nairobi around 233 km. As the area is vast, private lodges and camps are featuring private airstrips. Flying is the best to access the National Park.

The busiest month for Tsavo East is in December. Tourists visit Tsavo East. A trip is best irom June to October to Tsavo East. January and February are favorable wildlife watching. The rains are peak in April and May and the short rains in November. 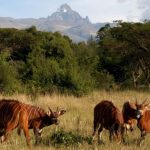 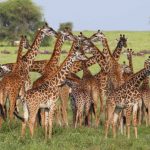 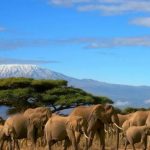 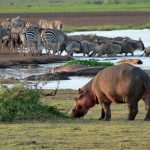 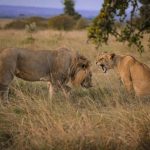 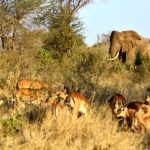 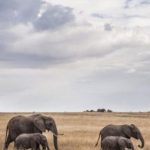 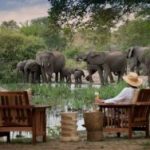 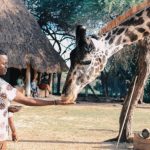