The vast landscapes and spacious sky of Namibia are just as important to the country’s identity as the country’s abundant wildlife. This is the natural world in its purest form, and Damaraland is no exception to the rule.

Inland from the Skeleton Coast, by around 60 kilometers, is where you’ll find Damaraland. During the day, you will explore the rocky outcrops in search of desert-adapted fauna, and during the night, the sky will come to life, acting as your very own personal planetarium. With no light pollution for hundreds of miles, the night sky truly does put on a beautiful display.

Damaraland is a unique destination

This surreal landscape is characterized by its craggy mountains, striking rock formations. And boulder-strewn slopes, all of which take on a golden hue as the sun sets against the backdrop of a multicolored sky.

It is a spectacle that, in a short amount of time, transforms into a spectacular and magnificent exhibition. Containing a million pinpricks of intense light in pitch-blackness. Damaraland’s night sky gives unobstructed views into the outer reaches of the cosmos. Providing for spectacular chances to go stargazing since there are neither big towns nor many people living there.

In the east, you’ll find a predominance of low acacia trees and scanty grasslands. Whilst the north is home to extensive expanses of umbrella thorns, mopane trees, and Makalani palms.

The Brandberg mountains, which are located in Namibia, are the country’s highest physical feature, rising 2,573 meters above the dry plains below them. They have one of the most impressive collections of rock art in the world, which dates back approximately 6,000 years. The White Lady is the most well-known of them all and may be reached without much difficulty when accompanied by a knowledgeable tour guide. 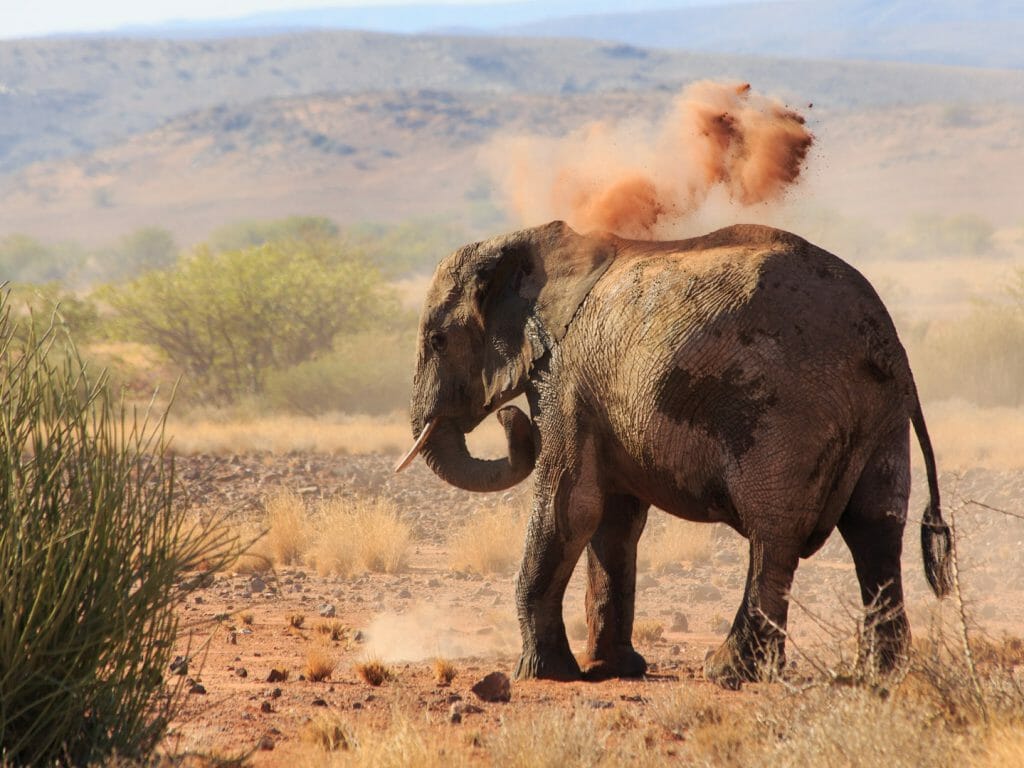 Both the Tsisab Ravine, which is on the north-eastern side of this Mountain. And the Twyfelfontein, which is located around 50 kilometers south of Brandberg. They are regarded as housing some of the most varied collections of rock art and painting that have ever been found. Twyfelfontein is a place of exceptional cultural significance that has been designated as a World Heritage Site. It provides some insight into the spiritual lives of the ancient people who lived there.

There are a number of interesting places to visit in the region of Khorixas. Which served as the capital of the Damaraland bantustan before Namibia’s independence. One of them is the Vingerklip. This enormous rock finger, which is 35 meters in length and sits 929 meters above sea level. And is dangerously protruding from the surrounding area’s flat-topped mountains.

The Organ Pipes have been there for 120 million years. And they are made up of hundreds of angular columns that are stacked beside one another. In the same area, Burnt Mountain sparkles with a rainbow of brilliant colors in the early morning and late afternoon light. At least 250 million years have passed. It is since the time when the petrified trees that are located to the west lay uncovered on a bed of sandstone.

The Spitzkoppe, often known as the Matterhorn of Namibia, is a steep and hard playground for people who love to trek, climb, and boulder. The Spitzkoppe is located at the southern extremity of the area.

Due to the intriguing way the light plays on your surroundings. Damaraland is a dream for photographers. This is because there is so much to see in the area. Participating in organized walks, treks, and tours of the region. It is while you are in Damaraland is the very best way to spend time there. Tracking some of Namibia’s most recognizable species in these vast vistas is the highlight of every trip to Damaraland.

In the mountains surrounding Etendeka, Palmwag, and Damaraland camp. You can find more common species such as baboons, giraffes, kudus, steenboks, warthogs, oryx. Also, Hartmann’s mountain zebras, springboks, porcupines, and klipspringers. Desert-adapted animals such as elephants and rhinos are a testament. It is to the adaptability of nature.

The Koakoveld is home to ten bird species that are on the verge of becoming extinct. Including the Ruppel’s korhaan, the Monteiro’s hornbill, the Herero chat, the black eagle, the tractrac chat, and the red-billed hornbill.

The Damara, the Himba, and the Herero are three of the indigenous demographic groups that still share a great deal of culture and ancestry with their San predecessors. Also, Damaraland is home to all of these people.

In spite of the fact that these people share some characteristics. They have developed in quite different ways throughout time. For example, each of them has developed its own mode of clothing. And strategy for surviving in this difficult climate. 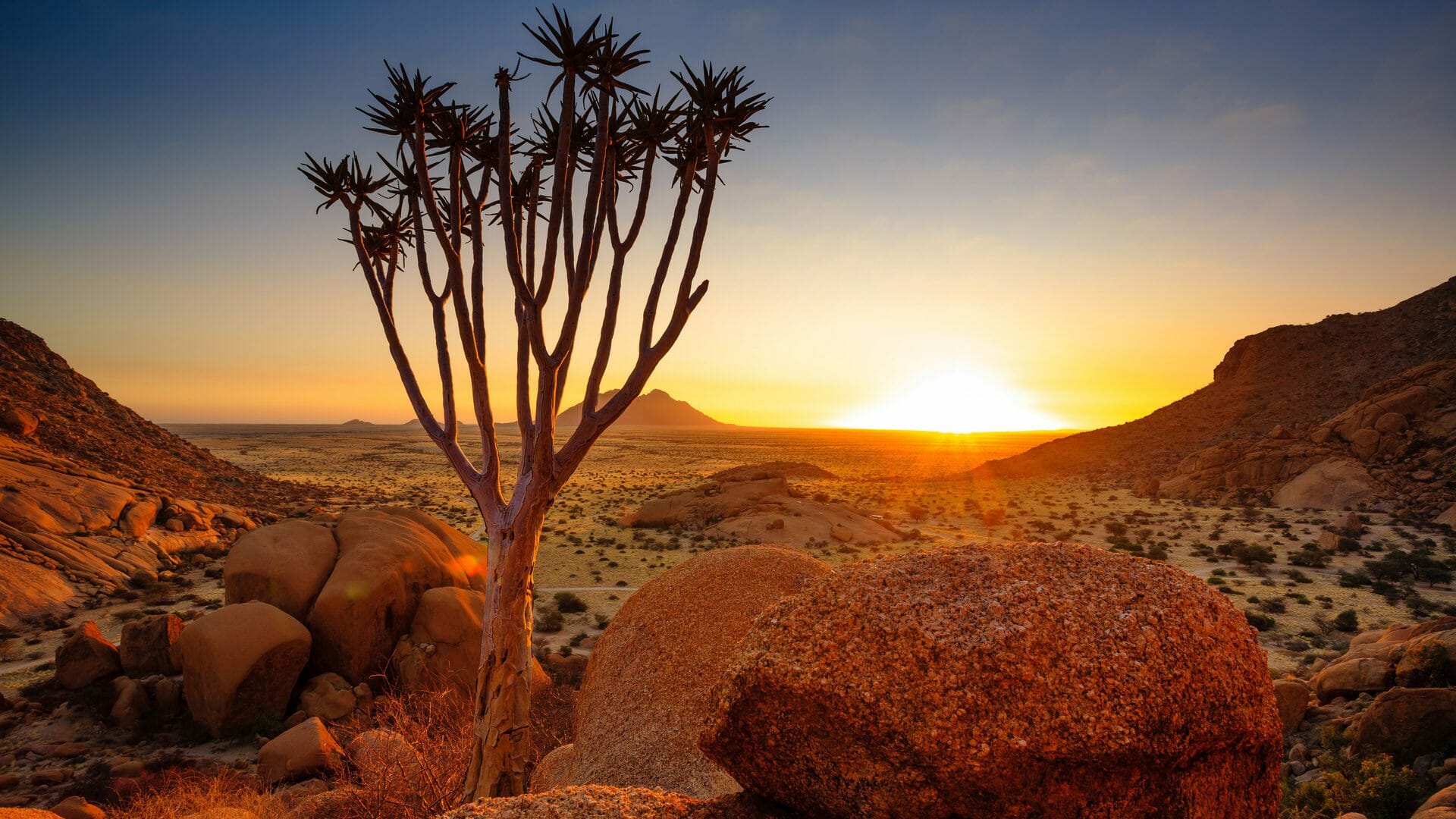 The Living Museum of the Damara gives visitors a chance to learn about a life that previously existed in Damaraland. It is via the presentation of a genuine recreation of the time period. In addition, there is a Himba hamlet close to Palmwag that can be visited by tourists on guided excursions. And as you go into Damaraland, you will come across a number of Herero settlements.

You’ll discover around fifty separate tree trunks scattered throughout an open region of land, which was likely formerly a riverbed. Some of the tree trunks are partially submerged. They have undergone a process known as silicification, which has caused them to convert into stone over a very long period of time. It is believed that they are 260 million years old.

This rock formation is around 100 meters in length and is made up of a singular group of dolomites that are each four meters in height. They certainly have the appearance of organ pipes. Also, Burnt Mountain is located quite close to where the Organ Pipes are located. When seen in the light of the early morning or evening, the rock seems to glow a rich orange color and gives off the impression that it is on fire.

It is highly recommended that you visit Damaraland during your time in Namibia if you are observing for an experience that is unique to the country. This region is home to a wide variety of magnificent animals and intriguing people. All of which combine to make for a vacation that will live long in memory.