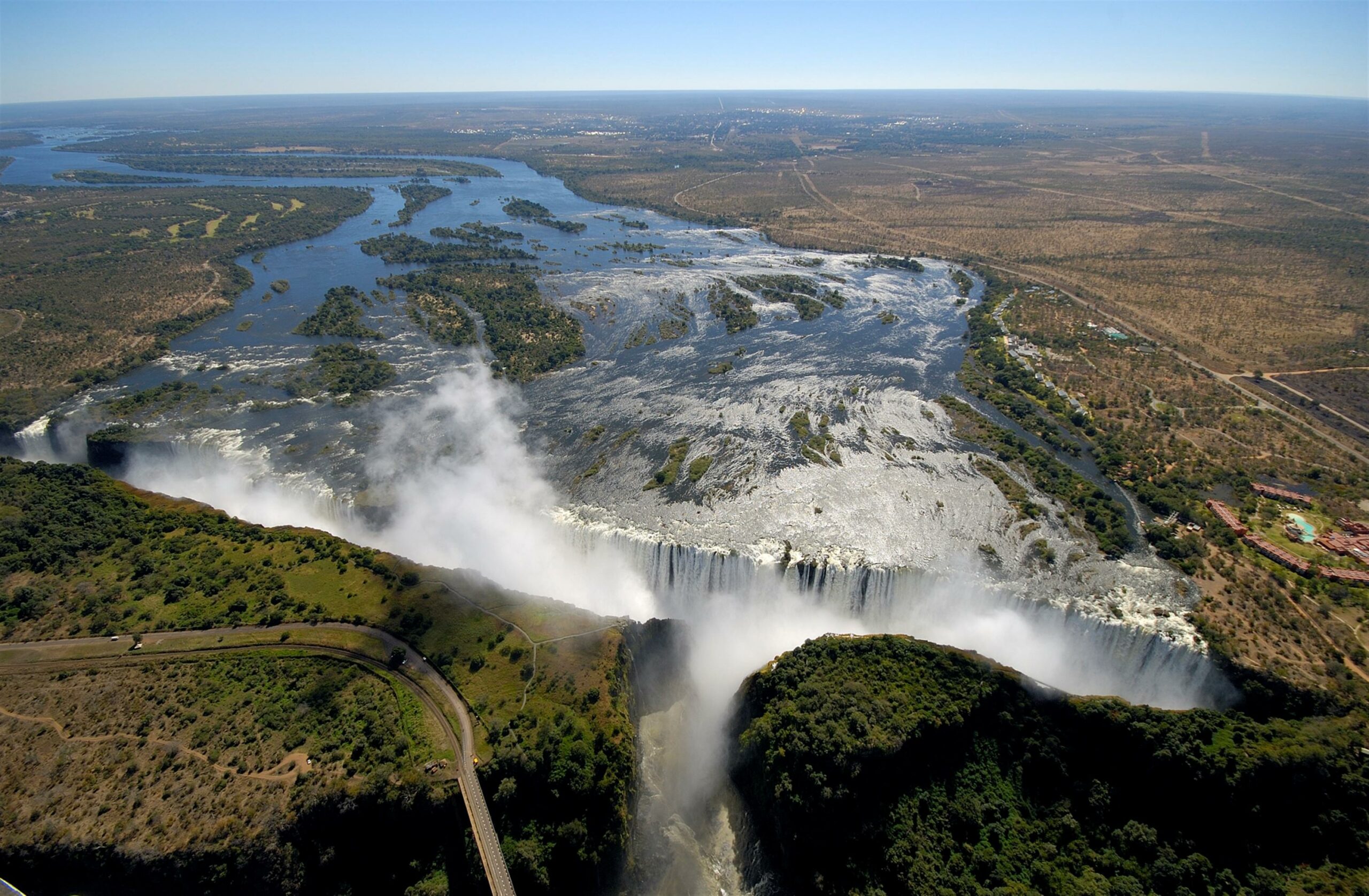 On the Zambezi River, which serves as the boundary between Zambia and Zimbabwe, is where you’ll find the magnificent and awe-inspiring Victoria Falls. This natural wonder is a sight to see. The Kololo people who lived in the region in the 1800s referred to it as “Mosi-oa-Tunya,” which literally translates to “The Smoke that Thunders.” In today’s parlance, Victoria Falls is referred to as the waterfall that creates the largest curtain of cascading water anywhere in the globe.

The Zambezi River, which was once a calm body of water, is now a raging torrent that carves its way through a number of impressive gorges thanks to a large basalt rock that the falls roar over.

Other side of the fall

The other side of the Falls is dominated by a second vertical basalt cliff that reaches the same height. And is topped by a densely forested area that is covered in fog. A walkway that runs along the edge of the forest offers. It is for those who are willing to withstand the intense spray an unrivaled succession of views of the waterfalls.

Visitors can get the best view of the Eastern Waterfall and the Main Falls as well as the Boiling Pot. Which is the point where the river goes and heads down the Batoka Gorge. It is by standing on the Knife-edge Bridge, which is a special vantage point. Other viewing sites include Devils Pool, Livingstone Island, the Falls Bridge, and the Lookout Tree. Each of which offers panoramic views over the Main Falls. Livingstone Island is also a popular destination for tourists.

Flights on helicopters above the Victoria Falls

The breathtaking helicopter ride above Victoria Falls is so breathtaking that it has earned the name “Flight of Angels.”

When David Livingstone saw Victoria Falls for the first time in 1855, he is credited with writing that “Scenes so exquisite must have been looked upon by angels on their flight.” This is now a famous quote. He had no idea that precisely the same chance would present itself to him one hundred and fifty years later. When seen from above, Victoria Falls may be appreciated for the genuine splendor that they are. This is the greatest method to do it. All of the seats in our helicopters have specifically constructed windows in the form of a bubble, making them ideal for panoramic views and providing excellent picture possibilities.

A ride in a helicopter above the majestic Victoria Falls is an experience that comes just once in a lifetime and should not be passed up. You will be overcome with wonder as you get a bird’s-eye view of the crashing waterfall below. Fly far above the towering curtain of mist that is produced by Victoria Falls. And prepare to be awestruck as you take in the spectacle of the biggest sheet of falling water in the world. Take some time to reflect on the beauty of this natural phenomenon. And take in the sights, for these are the kinds of experiences that you remember and cherish for a long time.

In addition, don’t forget to bring your camera along on this helicopter ride over Victoria Falls. So that you may take advantage of the countless picture chances. It is that will present themselves to you. You have the option of taking the shorter and more well-known “Flight of Angels” helicopter ride (which lasts 13 minutes). Or going on the longer and more comprehensive “Zambezi Spectacular” ride (which lasts 25 minutes). 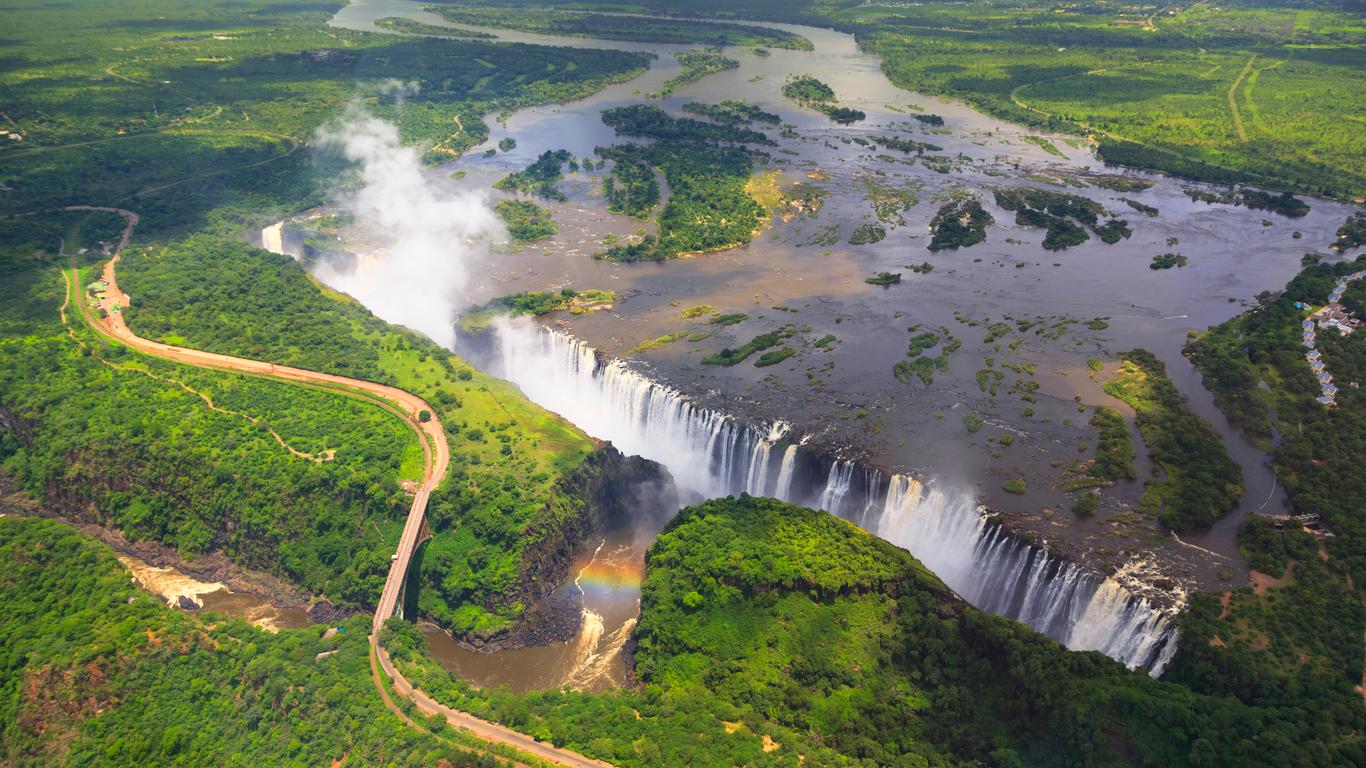 We had a helicopter ride above Victoria Falls, which is a really beautiful and gorgeous part of the globe, and we got some incredible images as a result. Because it is the biggest waterfall in the world, Victoria Falls is home to a number of rare species that can be found nowhere else on the earth. These species are endemic to the area and cannot be found anyplace else. We got to see some of Africa’s most unique and varied plant and animal life. It should come as no astonishment that this location is abundant in natural features, and we can guarantee that there are still some locations on earth that are untouched by the din and bustle of urban centers.

As a result, Victoria Falls should be at the top of your list of potential vacation spots. It is if you want your trip to be one to remember. The helicopter ride there is the icing on the cake. And an experience that only comes around once in a lifetime.

1. Does a helicopter ride over Victoria Falls worth it?

A: Helicopter rides above Victoria Falls are expensive but worthwhile. Victoria Falls, on the Zambia-Zimbabwe border, is twice the height and breadth of Niagara Falls.

2. What is the cost of helicopter ride?

3. What is so special about Victoria Falls?

A: Victoria Falls, known for its spray, mist, and rainbows, is the world’s largest sheet of falling water.

4. Is Victoria Falls bigger than Niagara?

A: Victoria Falls is nearly twice the height and half a kilometer broader than Niagara Falls. Victoria Falls spray may soar 400m above the falls and be visible 48km distant in the rainy season.

5. Can you swim in Victoria Falls?